The expectations of consolidating the Expodireto Cotrijal as one of the largest fairs of technology and business in Brazil were fully reached in its second edition, which occurred from 20th to 23rd of March of 2001, when the number of exhibitors increased to 172 companies, the public of visitors overcame the 71 thousand people during the four days of exposition  73% more than in 2000 and the motion of business reached R$ 31,6 million officially, 50% superior to the previous edition, not considering the sales done in an indirect way or negotiated in the fair for a posterior deal.

In 2001, the area destined to the Exposition was expanded from 32 hectares to 64,4 hectares and the infrastructure was also expanded.

The fair closing counted with the presence of the Agriculture minister Marcus Vinícius Pratini de Moraes, who classified the event as one of the most important of the area in the country, promising to extend the participation of the Agriculture Ministry in the next editions. 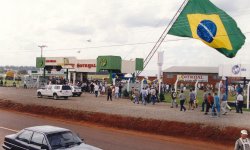