The Expodireto Cotrijal 2003, which occurred from 17th to 21st of March, beat all records. The amount of business, which is one of the main success rates of an event of this kind, overcame the R$ 200 million, 100% superior to the initial expectation of R$ 100 million, and the public reached 122.850 people, which also overcame the expectations that were of 110 thousand people.

Nothing less than 748 buses and 29.220 cars parked in the park, bringing visitors from all Rio Grande do Sul and other states from Brazil. During the five days of the fair, were consumed 117 thousand soda cans and 31.658 liters of mineral water, besides the cold drinking water available in all the stands and strategic points in the park for all the visitors. The numbers of lunches served in the food court and of lunches sold directly in the towners, also overcame in 40% the previous year.

The numbers, however, which have better underlined the success of the Expodireto Cotrijal 2003 come from the visitors. 92,87% of the 26.518 people who spontaneously participated of the delight indicator, an electronic device installed near the entrance gates to indicate the level of satisfaction of the people, said that they were very satisfied with what they found in the fair. In the edition of 2002, this number was of 87,77%, in the edition of 2001, of 92,1%, and in 2000, of 80,3%.

The average of the public satisfaction raised to 98,67%, when evaluated, through different researches, in specific areas: field technology, dynamic of machinery, seminars, food, restrooms, cleaning and the park maintenance, parking lot, animal production, diversification for the rural properties and the space of nature Cotrijal. In the item of general evaluation of the Expodireto Cotrijal 2003, all evaluated with the highest score, considering the event excellent and indicating it for other people. 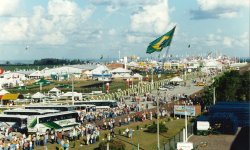 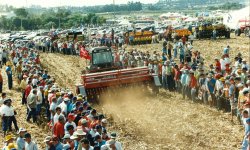 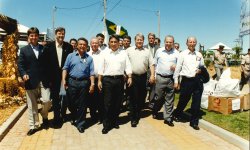